With SPFx 1.7, the ability to build Microsoft Teams tabs with SharePoint Framework was released in preview. It's not just a SharePoint page hosted in a teams tab, it's aware of the context information around the current user, team, channel, tab etc. and is also able to interact with the team.

Here is the Microsoft docs article about it, have a read if you haven't already:
https://docs.microsoft.com/en-us/sharepoint/dev/spfx/web-parts/get-started/using-web-part-as-ms-teams-tab

The article walks us through the process of building and publishing a production package of an SPFx solution so that it can be used as a SPFx webpart as well as a tab in Microsoft Teams.

In this post, we will go through the process of actually debugging the solution when it is being built. During development, when we make changes to the TypeScript code, we don't want to publish a production package to the App Catalog every time to test our changes.

The ideal development flow for me is to upload the SPFx package once to the App Catalog on the dev tenant, run gulp serve and when changes are made to the code, they should immediately be available to test as a Microsoft Teams tab.

To achieve this, first you will need to create an SPFx 1.7 solution as described in the docs, then update the webpart code to make sure that the microsoftTeams.Context is available to consume.

Now here is where the process deviates. Instead of creating the production package with the --ship flag, we will create a development package with:

After which you should see the console screen similar to this:

Getting the warning which says that the scripts (Client Site Assets) will not be packaged with the solution is important as we want them to be referenced from the local dev machine.

Next, we will upload and deploy the package to the tenant app catalog as usual: 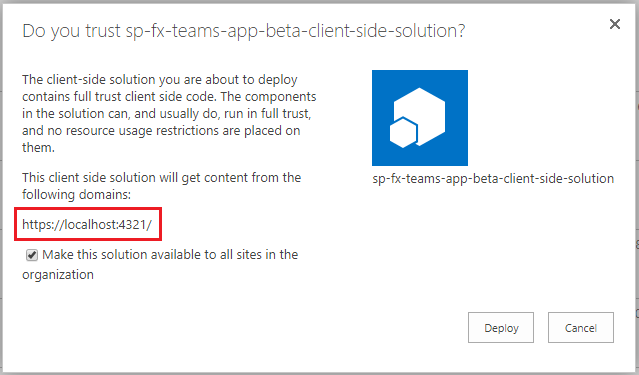 Notice that the scripts will be loaded from localhost.

Next we need to make the scripts available from localhost. For that, we will run: 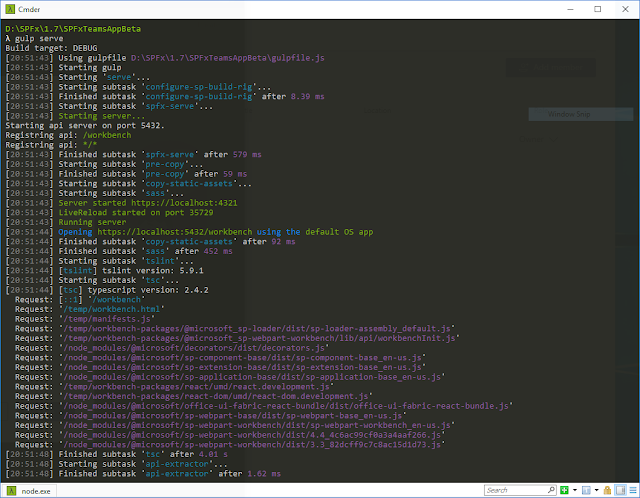 Now we need to upload the teams package which will make the SPFx webpart available in teams as a Tab.

This process is exactly similar to how it's done in the Microsoft docs article:
https://docs.microsoft.com/en-us/sharepoint/dev/spfx/web-parts/get-started/using-web-part-as-ms-teams-tab#packaging-and-deploying-your-web-part-as-a-microsoft-teams-tab

We make sure that side loading of apps is enabled on Teams, then go to any Team > Ellipsis > Manage Team >  Apps > Upload a custom app > Upload the Zip file.

That's it! You Teams tab is now loading the scripts from localhost: 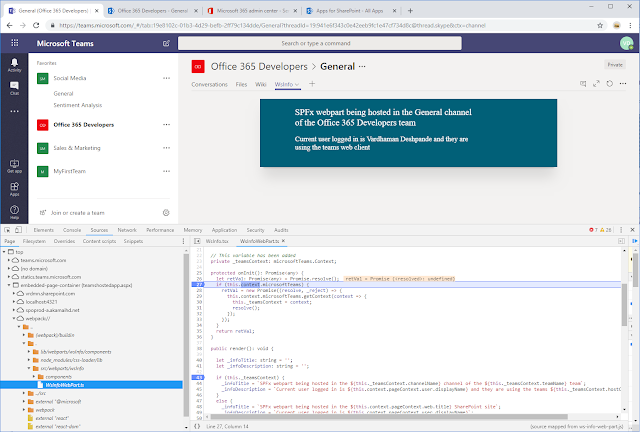 Make sure gulp serve is still running and then you can test by changing something in the code and press the reload tab button. The tab should be updated with the new code.

You can also test in the Teams Desktop client. Just make sure that the "Developer Preview" option is enabled:

Thanks to petkir for this tip!

After this, your SPFx tab should load in on the Teams Desktop client as well:

Hope this helps!
Posted by Vardhaman Deshpande at 9:05 am No comments: