What is a Bot Framework Proactive message?

Usually, for starting a conversation with a Microsoft Teams bot, the user has to initiate the conversation either by sending a personal message to the bot, or by mentioning the bot in a Teams channel or by invoking a messaging extension.

With proactive messaging, the bot can start a conversation with a user (or in a Teams channel) without anyone having to invoke the bot first. This conversation can be started based on any custom logic fit for your application e.g. The occurrence of  an external event, or a webhook getting triggered or even on a scheduled periodical basis.

I should mention that the bot will first need to be installed in the Team, if you want to send a proactive message to a Teams channel, or to the users who are part of that team.

How to send proactive messages?

So in this post, let's look at a few code samples which make it very easy for our Teams Bot to send proactive messages to users or channels in a Team.

If you have a look at the Bot Framework code samples published by Microsoft, they all use code which is running under the messaging endpoint. This initially led me to believe that even for proactive messaging, the code should live under the same endpoint. But as we will see in this post, that is not the case.

What are the prerequisites?

As mentioned before, our bot will need to be installed in a Team first. This will allow the bot messaging endpoint to receive the required values from Teams and send it to our proactive messaging code. If the bot is not installed in the Team, you will get a "Forbidden: The bot is not part of the conversation roster" error.

This is the Url to which our proactive messaging code should send all the requests. This Url is sent by Teams in the Bot payload in the turnContext.Activity.serviceUrl property. For all intents and purposes this url will remain constant but after having a discussion with Microsoft, they have recommended that this url might change (very rarely) and our bot should have the logic for updating the stored base url periodically from the payload sent to the bot. More about the Base Url here: https://docs.microsoft.com/en-us/azure/bot-service/rest-api/bot-framework-rest-connector-api-reference?view=azure-bot-service-4.0#base-uri

You can get the internal team id from the Bot payload in the channelData.team.id property. You can also get this id through the Microsoft Graph API: https://docs.microsoft.com/en-us/graph/api/resources/team?view=graph-rest-1.0#properties

If we want our bot to post to a specific channel in a Team, then we will need the channel id as well. The format for the channel id is exactly the same as the internal team id. Also, you can get the channel id from the bot payload as well as the Microsoft Graph api: https://docs.microsoft.com/en-us/graph/api/resources/channel?view=graph-rest-1.0#properties

This would only be needed if you want to send a proactive personal message to a specific user. For all users in a team, Teams maintains an encoded user id so that only bots installed in a team are able to message users. To get this user id, our bot needs to call the conversations/{conversationId}/members REST API endpoint. Fortunately for us the Bot Framework wraps this call in a handy SDK method as shown in the third code sample below. 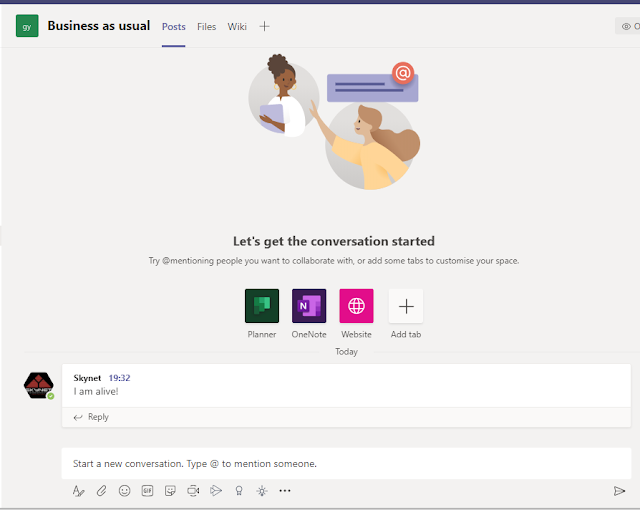 This code has been updated for Bot Framework v4.12.2 NuGet Gallery | Microsoft.Bot.Builder 4.12.2
Also, before running this code, make sure that the user has installed the bot app in the personal scope or is a member of a Team which has the bot installed.

Hope you found the post useful!
Posted by Vardhaman Deshpande at 9:28 am 16 comments:

In my previous posts, I have written quite a few times about SharePoint Framework service scopes (I will add links at the end of the article). In short, Service Scopes are the SPFx implementation of the Service Locator pattern i.e. a single shared "dictionary" where services (either oob SPFx or custom) are registered and can be consumed from any component in the application.

For example, without using service scopes, if we wanted to make a call to the Microsoft Graph (using MSGraphClient) from within a deeply nested react component, either we would have to pass in the SPFx context down all the components in the tree, or maybe a create a custom service which returns the web part context, and then call that service from within our nested component. Or maybe use redux to globally maintain the context in a single state object.

But with all these approaches (there may be more), testing the components would be difficult as they would have a dependency on the SPFx context which is hard to mock. Waldek Mastykarz has a great post on this.

Also, from a maintenance point of view, it could get tricky as almost all our components would start to depend on the entire context and we could easily loose track of which specific service from the context is needed by the component.

Fortunately, in the recent versions of SPFx, React 16.8+ was supported which means that we can take advantage of React hooks. Specifically, the useContext hook. This gives us a very straightforward way to store the SPFx service scope in the global react context (which is different to the SPFx context) and then consume it from any component in our application no matter how deeply nested it is.

Let's see how to achieve this. In these code samples, I am using SPFx v1.10 which is the latest version at the time of writing.


First, we need to create the React application context object which will be used to store and consume the service scope. For now I am only storing the serviceScope in the context. Other values can be stored here as well.

Fortunately, there is a way to use react hooks with classes by creating a Higher Order Component (HOC) which is a functional component. We can wrap all our class components with this HOC and safely consume the useContext hook from within this component.

(Update: If you are interested in going down the "full hooks" approach and doing away entirely with classes, Garry Trinder has got you covered. He has created a fork which only uses functional components and hooks so we don't need the HOC. If you want to take this approach, check out the code here: https://github.com/garrytrinder/spfx-servicescopes-hooks)


Next, we update our SPFx webpart to only pass in the serviceScope once to our top level component:


Our top level component will need to be wrapped with the AppContext so that any nested component will be able to consume it. This just needs to be done once on the top level react component. You will notice that the HelloUser child component does not need any props passed in.


Due to the Higher Order component and the useContext hook, we are able to access the serviceScope property from withing the child component. We can grab the MSGraphClient from the serviceScope and start making calls to the Graph:

And that's it! This way, we can use the React useContext hook to globally share our SPFx service scope.

Hopefully you have found this post helpful! All code is added in the GitHub repo here: https://github.com/vman/spfx-servicescopes-hooks


Also, if you are interested, here are all my previous articles on SPFx service scopes:

Getting the current context (SPHttpClient, PageContext) in a SharePoint Framework Service

Service Locator pattern in SPFx: Using nested scopes to work with multiple components
Posted by Vardhaman Deshpande at 8:33 am 5 comments: